Todays guest post is brought to you by Joanna from http://shirtordress.blogspot.com. This is all part of the 20 Something Bloggers “Blog Swap 3“. Don’t forget to go check out my post over on her site.

When I lived in LA, one weekend some friends of mine were talking about this bar in Hollywood they went to the weekend before. Apparently, the guy who played Adam Banks in the Mighty Ducks movies worked there. I promptly yelled “Vincent A. Larusso???!!!!!” What Pete, Dave, and K-Dawg didn’t know was that I was OBSESSED with this kid in 7th grade. Oh yes, I had all the movies. I was first in line when they became rentable. I had the Tiger Beat poster. And, I clearly remember my friend Jan and I screaming “oh my God!! He is sooo cute!” and rewinding ALL of his scenes in the Ducks movies like the boy crazy middle school girls we were. So, of course after that weekend, I desparately wanted to hit said bar up and see him for myself. My mission? Get a picture with him in a tactfully and polite manner (Yeah… that didn’t happen… Oh, I got the picture, sure, but… well, what’s that “tact” word mean again?)

Here’s what happened: My best friend, Vicki, and I went on the prowl. Vicki, I came to find out, also had a uber-crush on Vincent (oh yes, we’re on a first name basis now). Upon entering the bar, we see him and Vicki turns to me and says “Oh my God, Its effing Adam Banks.” Ssssshhhh Vicki! We have to do this discretely!!

You’d think that we would have gone into this prepared. You’d think we’d come up with a slick line like “so, wanna pull a flying V?” or “how was it working with Emilio?” or maybe even “where’s Pacey?” But no. The best we could come up with when meeting one of the absolute biggest teen idols of our 7th grade year was “Listen. We know who you are and you’re the only reason we’re here.” Wow. We are slick. Of course, this is after we had ordered like 9 drinks from him.

The best part, though, was when I was closing my tab I told him how embarrassed I was about the whole thing. He turns to me and says “YOU’RE embarrassed? I’m the one who’s embarassed” Aw, Banksy! Don’t be embarrassed! 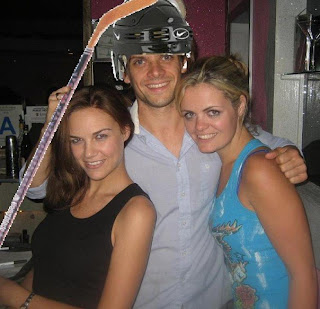 So, I wonder how often that happens to him….